Reduce damage from Scorched by 15% for 10 minutes. Restores health.

Nuka-Cola Vaccinated, also known as Nuka-Cola Scorched or Nuka-Cola My Blood's In It, is a consumable and miscellaneous quest item in the Fallout 76 update Wastelanders.

This type of Nuka-Cola is invented by the Vault Dweller and Vault 76 overseer at the Kanawha Nuka-Cola plant during the quest The New Arrivals, intended as a way to mass-produce a vaccine for the Scorched Plague. Using the Vault Dweller's treated blood after An Ounce of Prevention, the overseer or dweller is able to isolate the inoculation's antibodies and splice the formula's yeast via recombination to be able to reproduce said antibodies.[1] They could then efficiently produce the vaccine and inoculate the Raiders and Settlers.

When creating it, the player character is given the choice of naming the formula Nuka-Cola Vaccinated, Nuka-Cola Scorched, or Nuka-Cola My Blood's In It. The name is purely cosmetic and only affects the name and logo of the drink when viewed in the Pip-Boy.

The soda contains the player character's treated blood, immune to the Scorched Plague due to their inoculation by Responders technology. It uses the standard caramel color and default red and white labeling. The formula heals 20% HP for two seconds and 2% HP for 20 seconds.

The name of the drink cannot be changed after one is chosen. 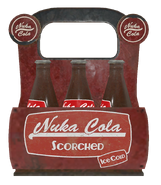 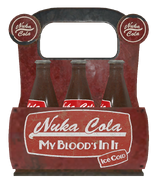 "My Blood's In It" variant

"Scorched" on the conveyer belt 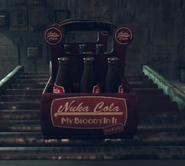 "My Blood's In It" on the conveyer belt