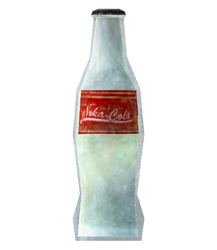 Nuka-Cola Quartz is a consumable item in Fallout: New Vegas.

Nuka-Cola entered the beverage market in 2044, with the invention of the soft drink by John-Caleb Bradberton after two years of experimentation. Though strictly unhealthy (containing 120% of the recommended daily allowance of sugar), it took the United States market by storm and within a year it could be purchased nationwide. Its popularity rapidly increased and within several years it was the most popular beverage across the globe.[1][2]

Nuka-Cola contains excessive amounts of caffeine and 120% of the recommended daily value of sugar, making it decisively unhealthy for extended consumption.[6] To counter the negative image, it was marketed as being fortified with vitamins, minerals and "health tonics."[7] Intensive consumption can cause Nuka-Cola addiction, which can lead to splitting headaches if Nuka-Cola isn't consumed on a regular basis.[8]

Nuka-Cola Quartz is a flavor of Nuka-Cola that enjoyed a limited release in the American Southwest.[9] It remains a rare find in the post-apocalypse.[10] It has a classy look, thanks to the lack of added food colorings but a distinctive white tint and glow.[11] It was developed under the code name "Angry Beaver," during development the beverageers added non-soluble sugar flakes to simulate a quartz-like appearance and to counteract the cavitation issues from previous attempts.[12] The Nuka-Cola Corporation had a trademark battle with Vim! Pop Incorporated over the "Quartz" trademark as Vim was also selling a drink known as Vim Quartz, and Nuka-Cola was successful.

Nuka-Cola Quartz is unique in that it has a white coloration. It provides low-light vision similar to Cateye, gives more health than a regular Nuka-Cola, and temporarily increases Damage Threshold. However, it contains much higher radiation than its regular counterpart and is much harder to find.

Though rare like Nuka-Cola Victory, it glows bright white with a hint of blue. It's hard to miss in low light conditions.

Retrieved from "https://fallout.fandom.com/wiki/Nuka-Cola_Quartz_(Fallout:_New_Vegas)?oldid=3484589"
Community content is available under CC-BY-SA unless otherwise noted.