Nuka-Cola Quantum is a consumable in Fallout 76.

Nuka-Cola Quantum was introduced in the fourth quarter of 2077, as a brand-new flavor of Nuka-Cola, with twice the calories, twice the carbohydrates, twice the caffeine and twice the taste.[1][2] The Whitespring Resort received early-release shipments, which are sold by Bubbles, the Nuka-Cola vendor.[3]

A clear bottle with glowing blue liquid inside (achieved through the use of the radioactive isotope Strontium-90). Upon consumption, it restores 200 Hit Points as well as 100 Action Points but confers 10 points of Radiation. 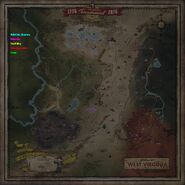 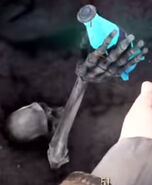 Skeleton giving a cola; in truth, it's a feral ghoul trap