Nuka-Cola Quantum is a consumable soft drink in Fallout 4.

This section is transcluded from Nuka-Cola. To change it, please edit the transcluded page.

The origins of this soda were unlike anything the Nuka-Cola Corporation had devised before: The beverageers of Nuka-World were signed over to the Army Research Laboratory's Weapon and Material division to develop biological and chemical weapons for the United States military as part of Project Cobalt. After months and months of work on several isotopes of strontium,[3] the team discovered the isotope strontium-90 that could weaponize anything in the military's arsenal but could also act as an additive to make a new cola flavor glow, similar to Nuka-Cola Quartz and Victory.[4] In fact, the isotope was so high energy that the beverage it would be added to effectively became sterilized, killing any bacteria with which it came in contact.[5] The designation of the strontium sample, Q4N7-UM, resulted in the isotope being named Quantum by its creator, Rex Meacham.[6]

The isotope was processed into an additive safe for human consumption by another beverageer, Ruth Leavitt.[7] The Quantum additive was mixed into the new flavor which featured an eighteenth fruit flavor: pomegranate.[8]

Of course, using a radioactive additive in a soft drink brought the expected dangers, even with the beverageer's expertise.[9] Reports in the Arlington, VA Nuka-Cola plant show that product development had not been without failures and casualties.[10] The first few trials of Nuka-Cola Quantum were ultimately fatal, but isotope CCE774 only resulted in dizziness and other mild side effects, allowing it to enter production for limited focus groups on the East Coast.[11] Pilot programs in Washington, D.C. indicated that the new flavor was going to take the market by storm.[12] The Food and Drug Administration did not record any effects that would force a recall, except for one minor side-effect: The isotope in Nuka-Cola Quantum caused the drinker's urine to glow.[13][14]

Nuka-Cola Quantum was officially released to the public the same day the bombs dropped: October 23, 2077. Because of this, Nuka-Cola Quantum is incredibly rare in the wasteland, with many bottles found in trucks that were shipping the product, ravaged by the bombs. It is more common in the Commonwealth and West Virginia than in the Capital Wasteland, however. At least in the Commonwealth, there were special "pre-release" shipments delivered to certain grocers and restaurants, accounting for its greater availability. The Whitespring Resort also received early-release shipments, which are sold by Bubbles, the Nuka-Cola vendor.[15]

The Quantum substance had originally been created as a secret weapon under the research of Doctor Rex Meacham, sponsored by the army. He managed to finish the project before his death, soon after the bombs dropped. His research can be used to create Quantum ammunition for the Thirst Zapper, which makes blue radioactive explosions that can disintegrate the target as well as Nuka Quantum grenades. After gaining the schematics, and related launcher, from John-Caleb Bradberton's private vault, the Sole Survivor can use Quantum to create enhanced mini nukes.

A clear bottle with glowing blue liquid inside (achieved through the use of the radioactive isotope Strontium-90). Like the other Nuka-Cola variants in the Commonwealth, it has a "fat" body and "fins" on the bottom of the bottle that makes it resemble a bomb or mini nuke. Unlike the original Nuka-Cola, Quantum does not have a circular label.

In 2015/2016, a real life version of Nuka-Cola Quantum was made by the Jones Soda Company and was sold in limited quantities at Target stores in the U.S. on the day Fallout 4 was released. However, it was merely repackaged bottles of Jones' existing Berry Lemonade. This marks the second time a real life form of Nuka-Cola was produced. The first was a drinkable regular Nuka-Cola, which was a promotional item during the 2008 E3 conference.

Crate of Nuka-Cola Quantum in the Nuka-Cola bottling plant

In the Third Rail 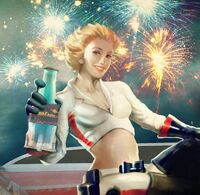 Retrieved from "https://fallout.fandom.com/wiki/Nuka-Cola_Quantum_(Fallout_4)?oldid=3313904"
Community content is available under CC-BY-SA unless otherwise noted.