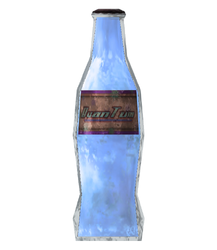 “This product is the pinnacle of taste sensation. Seventeen fruit flavors and that signature cola taste blend to form the perfect refreshing soft drink. With its new Strontium additive, it's got that unique kick to keep you on your toes.”— Milo, shipping foreman

Nuka-Cola Quantum is a consumable item in Fallout 3.

Main article: Nuka-Cola
Nuka-Cola entered the beverage market in 2044, with the invention of the soft drink by John-Caleb Bradberton after two years of experimentation. Though strictly unhealthy (containing 120% of the recommended daily allowance of sugar), it took the United States market by storm and within a year it could be purchased nationwide. Its popularity rapidly increased and within several years it was the most popular beverage across the globe.[1][2]

Nuka-Cola contains excessive amounts of caffeine and 120% of the recommended daily value of sugar, making it decisively unhealthy for extended consumption.[6] To counter the negative image, it was marketed as being fortified with vitamins, minerals and "health tonics."[7] Intensive consumption can cause Nuka-Cola addiction, which can lead to splitting headaches if Nuka-Cola isn't consumed on a regular basis.[8] Nuka-Cola Quantum was introduced in the fourth quarter of 2077, as a brand-new flavor of Nuka-Cola, with twice the calories, twice the carbohydrates, twice the caffeine and twice the taste.[9][10]

The origins of this soda were unlike anything the Nuka-Cola Corporation had devised before: The beverageers of Nuka-World were signed over to the Army Research Laboratory's Weapon and Material division to develop biological and chemical weapons for the United States military as part of Project Cobalt. After months and months of work on several isotopes of strontium,[11] the team discovered the isotope strontium-90 that could weaponize anything in the military's arsenal but could also act as an additive to make a new cola flavor glow, similar to Nuka-Cola Quartz and Victory.[12] In fact, the isotope was so high energy that the beverage it would be added to effectively became sterilized, killing any bacteria with which it came in contact.[13] The designation of the strontium sample, Q4N7-UM, resulted in the isotope being named Quantum by its creator, Rex Meacham.[14]

The isotope was processed into an additive safe for human consumption by another beverageer, Ruth Leavitt.[15] The Quantum additive was mixed into the new flavor which featured an eighteenth fruit flavor: pomegranate.[16]

Of course, using a radioactive additive in a soft drink brought the expected dangers, even with the beverageer's expertise.[17] Reports in the Arlington, VA Nuka-Cola plant show that product development had not been without failures and casualties.[18] The first few trials of Nuka-Cola Quantum were ultimately fatal, but isotope CCE774 only resulted in dizziness and other mild side effects, allowing it to enter production for limited focus groups on the East Coast.[19] Pilot programs in Washington, D.C. indicated that the new flavor was going to take the market by storm.[20] The Food and Drug Administration did not record any effects that would force a recall, except for one minor side-effect: The isotope in Nuka-Cola Quantum caused the drinker's urine to glow.[21][22]

Nuka-Cola Quantum was officially released to the public the same day the bombs dropped: October 23, 2077. Because of this, Nuka-Cola Quantum is incredibly rare in the wasteland, with many bottles found in trucks that were shipping the product, ravaged by the bombs. It is more common in the Commonwealth and West Virginia than in the Capital Wasteland, however. At least in the Commonwealth, there were special "pre-release" shipments delivered to certain grocers and restaurants, accounting for its greater availability. The Whitespring Resort also received early-release shipments, which are sold by Bubbles, the Nuka-Cola vendor.[23]

The Quantum substance had originally been created as a secret weapon under the research of Doctor Rex Meacham, sponsored by the army. He managed to finish the project before his death, soon after the bombs dropped. His research can be used to create Quantum ammunition for the Thirst Zapper, which makes blue radioactive explosions that can disintegrate the target as well as Nuka Quantum grenades. After gaining the schematics, and related launcher, from John-Caleb Bradberton's private vault, the Sole Survivor can use Quantum to create enhanced mini nukes.

Drinking a Nuka-Cola Quantum will increase one's Action Points by 20 for 4 minutes and radiation by 10. Mixed in a tin can with Abraxo cleaner and turpentine, it creates a Nuka-grenade, which is much more powerful than normal grenades. Nuka-Cola addict and fanatic Sierra Petrovita has created a recipe in which mixing Nuka-Cola Quantum with flour and vodka makes a delicious pastry.

There are 94 bottles found in the base game and 14 additional bottles included with the add-ons; a total of 108 bottles. See the table below for a full list of locations. Bottles found in vending machines are random and are not included in this list. Bottles sold through a specific random encounter merchant are also not included.

In addition, there is a random encounter on the map in which a traveling salesman will offer to sell a Quantum for 100 caps (or 50 if a speech check or barter check is passed). This can happen a theoretically unlimited number of times, but he will only sell one Quantum per encounter.

With this in mind, it should be possible to get approximately 120 extra Nuka-Cola Quantum bottles with extreme dedication. The reason extreme dedication is a prerequisite is that some locations have two vending machines, meaning a 1 percent chance of getting 2 Nuka-Cola Quantums (and a 18 percent chance of getting one). Furthermore, some vending machines are hard to find or are located deep inside an environment, so getting to them to determine the contents takes a lot of time. And to top it off, some locations like the Chryslus Building have 3 or more vending machines in certain cells. You're welcome to try to get 3 or more Quantums, but given the incredibly low probability (0.1 percent for 3 machines, 0.01 for 4 machines), this seems an exercise in futility. Ultimately, ~120 bottles (from vending machines) is a fair estimate of your net haul if you get approximately two bottles at every location with 2 or more Nuka-Cola vending machines and 1 bottle at locations with only 1 Nuka-Cola vending machine. This number should be obtainable even if you make a few careless mistakes (such as blundering into an outdoor cell early in your playthrough and then later realize it contained a Nuka-Cola vending machine).

With the Quantum Chemist perk added by the Broken Steel add-on, every 10 normal (not ice cold) Nuka-Colas that you have in your inventory automatically become one bottle of Quantum. Since Nuka-Cola respawns in several shops with this perk the Quantum count is raised from approximately 211 to an infinite amount. This perk is extremely useful if you have already used too many Nuka-Cola Quantums to complete The Nuka-Cola Challenge quest.

Quantum label
Add an image to this gallery

Retrieved from "https://fallout.fandom.com/wiki/Nuka-Cola_Quantum_(Fallout_3)?oldid=3288927"
Community content is available under CC-BY-SA unless otherwise noted.