Drinking a Nuka-Cola Quantum will increase the Courier's Action Points by 20 for 4 minutes and their radiation by 8.

A shipping crate just behind the Solitare gas station immediately below Hopeville missile silo bunker may contain a single bottle of Nuka-Cola Quantum.

The banner in Goodsprings General Store 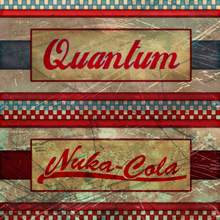