xx024536
“The most refreshing way to unwind”— Promotional quote

Nuka-Cola Dark is a variant of Nuka-Cola and a consumable featured in the Fallout 4 add-on Nuka-World.

Nuka-Cola Dark was the company's attempt at entering the alcoholic beverage market. The beverage was touted as "the most thirst-quenching way to unwind." Those partaking in the drink were recommended to not operate motor vehicles or heavy machinery for at least eight hours after drinking it, and encourage women who are pregnant or planning on becoming pregnant to avoid the drink. Still, it found success in many of the finer lounges and restaurants across the nation.

Nuka-Cola Dark shares the same look as the other bottles of Nuka-Cola but a dark brown color and a simplistic label. Nuka-Cola Dark is an alcoholic version of Nuka-Cola, boasting a 35% alcoholic content per volume. This drink temporarily increases one's Strength and Endurance by 1, but decreases Perception by 1 as well. Chilling a bottle of Nuka-Cola Dark with Buddy yields ice cold Nuka-Cola Dark, but there is no added benefit in doing so. However, the effects of the regular drink and its ice cold version stack.

This section is transcluded from Nuka-Cola (Fallout 4). To change it, please edit the transcluded page.

Poster in the Cola-cars arena 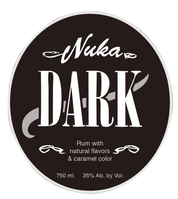