005FBC18
“Having a bad day, have a Nuka-Cola! Don't have any Nuka-Cola, let this Collectron find some for you!”— Scoreboard description

The Nuka-Cola Collectron station is a resource-gathering workshop object in Fallout 76, introduced in the Locked & Loaded update during the fourth season.

When built, this station will produce a singular Nukatron, a specialized Nuka-Cola branded Collectron, which will wander the nearby area, steadily filling the station's container with up to 10 regular Nuka-Cola varieties or a Nuka-Cola bottle, one at a time, every seven minutes and 20 seconds. The station can be set to search for "Nuka-Cola" or other owned Collectron resource types at the terminal.

The Collectron pod and resource bin are painted Nuka-Cola red, with "Nuka Cola" written in yellow lettering on the front of the pod, in large lettering. The top of the pod is capped with a painted yellow circle. The paint job is nicked and damaged, exposing bits of the metal beneath. The interface terminal is the same light blue as other Collectron stations, with no branding or decoration on it.

The item is found under Resources in the workshop crafting menu. Crafting is unlocked after reaching rank 50 of the fourth season or by learning the plan.

A Nuka-Cola Collectron station may be built at claimed public workshops or at a player character's C.A.M.P. after being unlocked or learning the plan.

Upon release, while designed to collect multiple types of Nuka-Cola, it only collected the regular flavor. This was fixed in the Steel Reign update. 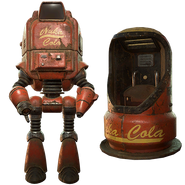