United States of America
Nuka-Cola is the flagship product of the Nuka-Cola Corporation and one of the symbols of United States culture. Introduced in 2044, it rapidly dominated the soft drink market, eventually becoming the most popular soda on the market and a staple of American culture.[1] Bottled and distributed nationwide, Nuka-Cola was available in such numbers that even two centuries after the Great War put a stop to all bottling operations, Nuka-Cola bottles can still be found in the wastelands in large quantities.[2] In the aftermath of the Great War, Nuka-Cola bottle caps became the de facto currency in most post-War societies.[3]

Nuka-Cola entered the beverage market in 2044, with the invention of the soft drink by John-Caleb Bradberton after two years of experimentation. Though strictly unhealthy (containing 120% of the recommended daily allowance of sugar), it took the United States market by storm and within a year it could be purchased nationwide. Its popularity rapidly increased and within several years it was the most popular beverage across the globe.[4][5]

The constant drive to improve and innovate the formula resulted in numerous flavor variations, with the most popular ones like cherry, grape, and orange released just a few years after the drink debuted.[6] Whenever the company encountered competition, it would attempt to deal with it aggressively. Cherry and grape variants of the Nuka-Cola were patents acquired by the company after identifying individual competitors. In other cases, the corporation would attempt to buy out competitors, as was the case with Sunset Sarsaparilla in 2058 and Vim! Pop Incorporated in 2077. Failing that, it would attempt to release a competing drink accompanied by a massive promotional campaign.[7] After attempts to acquire Sunset Sarsaparilla failed, Nuka-Cola attempted to directly compete with it through Nuka-Cola Wild and the opening of Dry Rock Gulch at Nuka-World. Though it gained a respectable popularity in the American Southwest, it failed to match that of Sunset Sarsaparilla.[8]

The latest Nuka-Cola taste variant was created in October 2076, as the head of the chemical weapons program instigated by John-Caleb Bradberton reported that his team created an isotope of strontium-90 that could be reliably weaponized, as a coating for power armor, a custom munition for the prototypical M42 Fat Man or even an area effect weapon that could be safely deployed from something as simple as a Thirst Zapper. It could also be used "somewhat safely" in a new kind of Nuka-Cola. Bradberton ordered it to be put into production, as Nuka-Cola Quantum (named after the isotope designation in the beverageer's system).[9]

Quantum was fast-tracked through the approval process, presented as the culmination of a three year research program. To create an isotope safe for human consumption, focus groups were used to test various variants of the Quantum isotope. After numerous casualties (at least 62 test subjects died as a result of organ failure, with many more hospitalized with radiation burns; families were provided with Nuka Condolences Fruit and Cheese Packages that contained liability waivers), a safe isotope was created and the first cases of Nuka-Cola Quantum hit the market in select cities on the East Coast, like Boston and Washington, D.C..[10]

Even after the War obliterated the parent corporation, Nuka-Cola would continue to be the most popular soft drink on the North American continent, available in almost limitless quantities. Despite being warm and flat, it holds the allegiance of many and continues to addict wastelanders.[11]

The unique taste of Nuka-Cola is the result of a combination of seventeen fruit essences, balanced to enhance the classic cola flavor.[13][14] The balance is precarious and minute adjustments can affect it severely. Such was the case when the freshly launched Nuka-Cola was reformulated in response to the Great Passion Fruit Famine of 2044 and consumers noticed the change in flavor.[15]

Nuka-Cola contains excessive amounts of caffeine and 120% of the recommended daily value of sugar, making it decisively unhealthy for extended consumption.[1] To counter the negative image, it was marketed as being fortified with vitamins, minerals and "health tonics."[16] Intensive consumption can cause Nuka-Cola addiction, which can lead to splitting headaches if Nuka-Cola isn't consumed on a regular basis.[17]

The iconic curved Nuka-Cola bottle was used by the company ever since its introduction in 2044. The Dazzling Blue color of the glass was popular with consumers: Market research in 2052 indicated that 86 out of 100 polled consumers chose blue as their favorite color.[18]

Nuka-Cola was forced to replace the curved design with a rocket-shaped bottle in 2077. It was the result of long-running litigation over patent infringement, a case that the Nuka-Cola Corporation lost. However, consumers reacted positively to the new Space Age bottle and Nuka-Cola's sales increased even further.[19][1]

Nuka-Cola was also distributed in soda fountains and cans, although these forms of distribution were far less popular than the iconic bottle, with cans finding its niche around the midwestern United States.[20][21]

The surge in popularity led to Nuka-Cola spreading nationwide. By 2067, there was a vending machine on almost every street in America, offering regular Nuka-Cola and any of its variants.[22] Popularity of its variants strongly depended on the region, with western states strongly favoring Nuka-Cola Quartz, Victory and the root-beer flavored Wild (competing with Sunset Sarsaparilla). More urbanized eastern states favored classic tastes, such as Nuka-Grape, Nuka-Cola Orange and Nuka-Cherry.[1]

However, a lawsuit that settled against the Nuka-Cola Corporation for use of Nuka-Cola's bottle design allowed them to rebrand starting with the product itself. Nuka-Cola would take a radical change to Nuka-Cola's image to a Space Age theme with bottles taking on the shape of a rocketship.[19] To compliment the new rocket ship bottle, a mascot from 2062 would begin to see reuse because of her glove-like fit the Space Age theme: the Nuka-Girl in a skimpy spacesuit with her raygun the Thirst Zapper.[26]

The logotype of Nuka-Cola would utilize basic brush script font in white with a unique 'N' and additional brush strokes for the hyphen and could also be underlined or stacked based on layout. Red would be the only color to compliment the white text, which both in turn compliment the black hue of Nuka-Cola. In the latter part of 2077, an orange stroke began to appear in advertisements but did not become ubiquitous because of the Great War. The use of this logotype is the most common among Nuka-Cola's products, but there were some problems with consistency in advertisements.[27]

To differentiate variant flavors of Nuka-Cola from one another, different logos would also be developed for each flavor, but each one would complement the base Nuka-Cola logotype which was always printed in smaller type on the flavor's label. This branding consistency would also carry over to locations, such as Nuka-World which uses the same font type for its logo.

Nuka-Cola became a nationally-recognized brand through a combination of aggressive marketing and hostile corporate practices, including takeovers and undermining its competition. The preferred approach was to acquire popular local sodas and rebrand or remarket them as Nuka-Cola variants. Such was the case with two of its flagship flavors, Nuka-Cherry and Nuka-Grape, originally Merle's Very Cherry Soda and Grape-Pearl Soda.[28]

Larger companies were typically more resilient and rebuffed Nuka-Cola's advances. One such case is Sunset Sarsaparilla, a sarsaparilla popular in the southwestern United States. When negotiations with the company fell through in 2058, Nuka-Cola attempted to compete by launching a rival soda, Nuka-Cola Wild.[8]

Another competitor is Vim! soda, a popular Maine drink. Owned by a single family, Vim! repeatedly refused offers from Nuka-Cola. In response, the company sued Vim! for copyright infringement (over the new Vim! Quartz soda) and committed industrial espionage and sabotage of its operations, effectively immune to prosecution thanks to John-Caleb Bradberton's ties with the government and the military.[29] 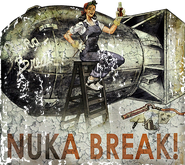 A Nuka-Cola billboard in Fallout 3. 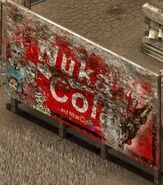 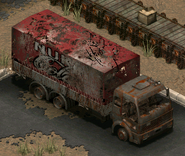 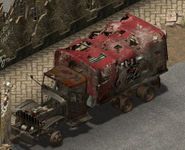 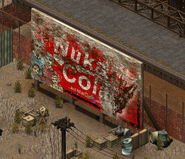 A Nuka-Cola Cherry billboard in Newton 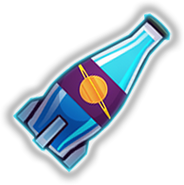 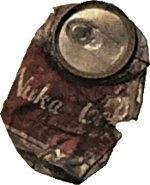 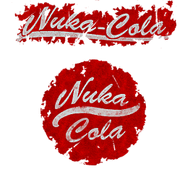 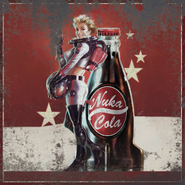 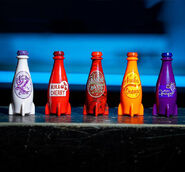