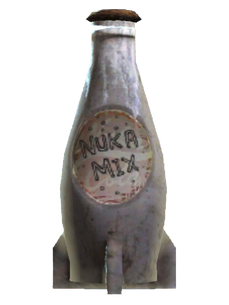 Nuka-Cide is a soft drink in the Fallout 4 add-on Nuka-World.

The recipe can be found at Nuka-Town USA's Cappy's Cafe, on the counter in the back of the cafe.

It can be crafted at any Nuka-mixer station.

Unlike some of the other Nuka-Cola drinks, Nuka-Cide effects do not benefit from the Chemist perk.

"Suicide" is a colloquial term for the mixture of all available soft drinks at a multi-flavor soda dispenser into a single cup. The suffix of "-Cide" and the Nuka-Cide's inclusion of every base Nuka-Cola variety into its ingredient list is possibly a reference to this practice and its resulting hybrid drink.

Collecting the Wasteland Survival Guide from Egret Tours Marina will reduce the amount of health restored to 100 instead of increasing it.[verified]

Retrieved from "https://fallout.fandom.com/wiki/Nuka-Cide?oldid=3315253"
Community content is available under CC-BY-SA unless otherwise noted.