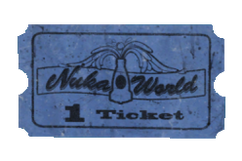 The Nuka-Cade ticket is a miscellaneous item in the Fallout 4 add-on Nuka-World.

The Nuka-Cade ticket is a small blue arcade ticket with the Nuka-World logo printed on it. Used to buy items and weapons at the prize terminal located in the arcade. They can be found in the form of single tickets, small ticket stacks worth between 5 and 30 tickets, and rolls of tickets worth between 750 and 1000 tickets.

Ticket rolls can be found:

Retrieved from "https://fallout.fandom.com/wiki/Nuka-Cade_ticket?oldid=3476802"
Community content is available under CC-BY-SA unless otherwise noted.