“If you don't know what an atomic bomb is, then imagine the worst thing possible. Atomic bombs were worse than that.”— Vault Dweller's memoirs

A nuclear weapon is an explosive device that derives its destructive force from nuclear reactions, either fission or a combination of fission and fusion. Both reactions release vast quantities of energy from relatively small amounts of matter; a modern thermonuclear weapon weighing little more than a thousand kilograms can produce an explosion comparable to the detonation of more than a million tons of conventional high explosive.

Nuclear weapons were first used in World War II on the Japanese cities of Hiroshima and Nagasaki in 1945, effectively ending the war. These two explosions are said to have been seen as the start of the eventual end of the modern world that would come 132 years later, because it set a dangerous example for humanity that would come after this: that a war could be ended with nuclear weapons. The atomic bomb, a purely fission-based weapon, and the hydrogen bomb, a fission-fusion hybrid weapon, were both developed in the Fallout universe, with hydrogen bombs being considerably more dangerous because of the sheer size of their explosive yields.

In the Fallout world, megaton-class thermonuclear weapons had largely been retired by the major nuclear powers in favor of much smaller-yield warheads by the time of the Great War. An average strategic warhead in 2077 (with a few exceptions, such as the weapons which fell on Washington D.C.) had a yield of about 200-750 kilotons, but with a massive increase in radioactive fallout in place of thermal shock, much like a salted bomb in our own world. However, despite the apparent reduction in raw explosive power, this arsenal was far more dangerous to the Earth's ecosystem, as it deposited far greater amounts of fallout in the atmosphere than had been assumed by pre-War models.[1]

China, the United States of America, the Soviet Union, the European Commonwealth's member states and other countries around the world possessed massive nuclear stockpiles, which they were not afraid to use against each other, or other nations in general.[2] Limited nuclear exchanges occurred before the Great War as well. One Middle Eastern terrorist organization even managed to acquire at least one nuclear weapon, which was detonated in Tel Aviv, Israel in 2053. A majority of the American, Chinese, and Soviet nuclear arsenals were used during the Great War, to devastating effect. The electromagnetic pulse resulting from every nuclear detonation rendered a large portion of humanity's electronics non-functional in an event later described as the Great Blackout.

In Fallout, the Glow is testament to the horror of nuclear war, a radioactive hellhole destroyed by a direct nuclear hit. In the same game, the Vault Dweller also discovers an unused nuke sitting in the Master's vault, to be used as last resort against an undefeatable enemy.

A nuclear bomb also rests on the Enclave Oil Rig, and is, once again, used to obliterate the main enemy of the game (detonated by an explosion of the on-board nuclear reactor).

Nuclear weapons feature prominently in Fallout 3, in the form of a C-23 Megaton[3] - Megaton's nuke, the Fat Man and its unique variant, the experimental MIRV, which are two tactical nuclear catapults, a bunker full of nuclear bombs, Vertibirds with nuclear carpet bombs, Liberty Prime's inexhaustible backpack arsenal of medium-sized bombs, various orbital weapons platforms such as Highwater-Trousers, and Bradley-Hercules - the Enclave-controlled satellite which destroys Liberty Prime in the Broken Steel add-on. Equally, near Fort Constantine, the Lone Wanderer has the ability to launch a Ballistic missile from a concrete silo, via a computer terminal, to an unmarked destination. 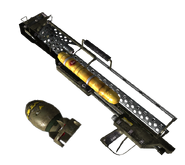 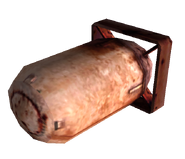 The C-23 Megaton returned in Fallout: New Vegas in the form of an undetonated atomic nuke called The One, which can be found north-west of the Devil's Throat if the player has the Wild Wasteland perk.

The Fat Man also returned in Fallout: New Vegas, it can be purchased from Knight Torres, a merchant in the Hidden Valley bunker. The Gun Runners also sell them. A unique version can also be purchased if the player has Gun Runners' Arsenal add-on.

In Lonesome Road many nuclear weapons are scattered throughout the Divide namely in an old missile silo. There are also some undetonated warheads scattered around in the divide that can be detonated using a Laser detonator. For more info see the page: Lonesome Road

A nuclear ICBM warhead appears first (called Plutonius) in Kansas City, worshiped by a ghoul cult. It is later used to gain entrance to Cheyenne Mountain installation, the Vault 0.

A nuclear device also rests on the Secret Vault, as an emergency decontamination procedure (a self-destruct system) if the Vault started to become too dangerous. A special monorail located in the first complex of the laboratories section should be used to evacuate the vault dwellers quickly to a secret exit in the mountains. The Initiate activates it to obliterate all of its research and all of the experimental deathclaws, radbugs, super mutants, robots, and the heavily mutated Attis, destroying both the Secret Vault and the city of Los.

The B.O.M.B.-001 space station, the endgame location, was an orbital ballistic missile launch platform, that Victor Presper wanted to use to reshape the world as he envisioned it.

The yield of the weapons in the games is never explicitly given. While it is stated that entire continents were scorched by nuclear weapons, their effects in the game are not even remotely similar to that description. Therefore, ten thousand or more nukes may have devastated the land. This would make sense, as each country would have at least a century's worth of nuclear weaponry in their stockpile. Also, during the 50's in the real world, Nuclear Strategy favored brute-force precision strikes on military installations with ICBM whilst relying on heavily irradiating a country's population by dropping large amounts of small-yield nukes on highly populated urban areas from strategic bombers, as ballistic missiles were somewhat rare during this time. The war as it is portrayed in Fallout seems to follow this doctrine to a large extent as observable by many in-game reports and terminal entries. Also, many military facilities in the game where stated to be hit first during the nuclear exchange, such as the West-Tek facility, the Sentinel Site and many other strategic installations throughout the US.

The way the weapons are portrayed in the games is inconsistent; in the classic Fallout games, nuclear weapons are feared, respected, and exceedingly rare (not to mention that arguably the most intelligent being in the Fallout world, the Master, is unwilling to unleash the power of the atom again). In Fallout 3 nuclear weapons are commonplace and devoid of their traits from previous games. You can destroy a small city with a nuclear bomb in the first few hours of the game, blow up cars in nuclear explosions and carry a personal tactical nuclear launcher.

The term nuke is also, in the Fallout Universe, a generic name for anything that resembles a missile. When Liberty Prime is destroyed in Fallout 3, there is no radioactive fallout, nor is there a scorched blast zone or mushroom cloud—the explosion is tiny in comparison to an real nuclear weapon (though such weapons are sometimes refereed to as in universe as "Micro-Nukes" hinting that they were designed to have a much smaller blast radius). The same can be said about the mobile base crawler in the Broken Steel add-on when it is destroyed by an orbital strike—again, there was just an explosion, and no radioactive, flaming byproducts of a nuclear detonation (although the Bradley-Hercules system may have only used conventional warheads). This may indicate the missiles aboard B.O.M.B.-001 or other orbital platforms were not actually primed with warheads, but were missiles waiting to be armed.

Another inconsistency with Fallout 3's nuclear missile theory is the shape of the actual weapons themselves. Some, like the one within Megaton are 1940s "Fat Man" atomic bombs: powerful, but were quickly surpassed by even stronger thermonuclear (or "hydrogen") weapons, which were not barrel-shaped but were more streamlined in appearance.

There are the more 'ballistic' missiles—the converted "space shuttles"—that are launched from concrete silos (like the one outside Fort Constantine) or submarines (like the Chinese Yangtze). Most missiles that can still be found are either broken or still waiting for launch, as some officers refused to fire their warheads including an entire arsenal of them in The Divide.

Oddly enough, while most of the strategic arsenal of the US has been launched, most orbital installations appear to have been forgotten about, or only partially launched their payload. It is unknown whether this is a design oversight, or if the weapons were indeed not properly armed.

Retrieved from "https://fallout.fandom.com/wiki/Nuclear_weapons?oldid=2741871"
Community content is available under CC-BY-SA unless otherwise noted.