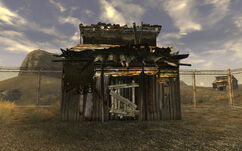 Interior of the shack

“I'm so done being confined in this human body. So, today I moved in to the shack at the abandoned test site. There should be enough radiation there to turn me into a ghoul. All around me this world is bleak and dreadful; is it so wrong to want a body to match it?”— Trash

The nuclear test shack is a small, building located in the highly irradiated old nuclear test site, equidistant from Caesar's Legion safehouse to the northwest and the crashed vertibird to the southeast.

Inside the shack, along the wall to the left of the entrance, is a refrigerator, an oven, some shelves, and an inoperable chemistry set. To the right are a dresser and a queen-sized bed with the body of Trash, a dead ghoul-wannabe. Reinforced leather armor can be looted from the corpse. A hunting shotgun can be found on the floor.

The nuclear test shack appears only in Fallout: New Vegas.

Trash will respawn in the shack three days after finding her corpse. She will have 0 HP and will die from any form of damage.[verified]

Location of Nikola Tesla and You and Entry two in the Die-ary of Trash
Add a photo to this gallery
Retrieved from "https://fallout.fandom.com/wiki/Nuclear_test_shack?oldid=3166670"
Community content is available under CC-BY-SA unless otherwise noted.
... more about "Nuclear test shack"
RDF feed
Has platform
PC +, Playstation 3 +  and Xbox 360 +