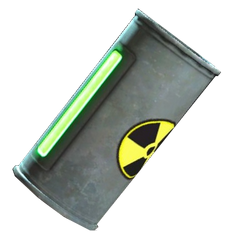 Nuclear material is a crafting component in Fallout 4.

A catch-all term for the various radioactive substances found in the Commonwealth. The nuclear material is a rare and valuable item used to craft weapon modifications as well as various explosives.

Retrieved from "https://fallout.fandom.com/wiki/Nuclear_material_(Fallout_4)?oldid=3450302"
Community content is available under CC-BY-SA unless otherwise noted.