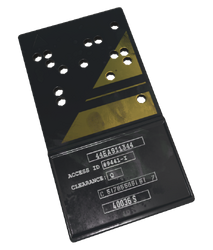 I Am Become Death
Hide and Seek and Destroy
Mission: Countdown

The nuclear keycard is a miscellaneous item in Fallout 76.

A crucial part of the automated nuclear missile silo network in Appalachia, nuclear keycards are required to unlock access to the launch console so that the launch code could be input. The receptacle in the missile control rooms would destroy the keycard regardless of whether the correct code was entered or not. This limitation was intended to limit the amount of nuclear weapons any single officer had at their disposal and the supply of keycards in case of escalation would be delivered by automated couriers of the Strategic Air Command.[1]

Convoys were set by the SAC to occur should the automated system monitoring Appalachia deem it necessary, based on the aggregate DEFCON rating. The Enclave under President Thomas Eckhart deliberately released various horrors upon Appalachia to trick the system into raising the DEFCON rating, starting with Chinese Liberators and ending with scorchbeasts.[2]

Retrieved from "https://fallout.fandom.com/wiki/Nuclear_keycard?oldid=3157052"
Community content is available under CC-BY-SA unless otherwise noted.