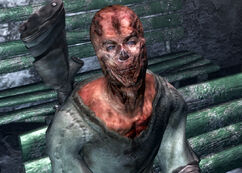 Novice is a ghoul found listening to the Mother Curie III's sermon in the basement of the Holy Light Monastery in 2277.

Commended by Mother Curie III for his devotion to the cause, Novice is wowing the other visitors to the Holy Light Monastery with his "hint of brain" poking through a section of exposed skull. His path to the light is almost a certainty.[1]

The Novice appears only in the Fallout 3 add-on Broken Steel.

Retrieved from "https://fallout.fandom.com/wiki/Novice?oldid=3081381"
Community content is available under CC-BY-SA unless otherwise noted.