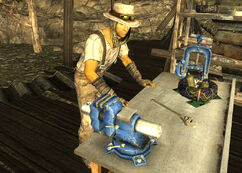 “Boone must've had a hell of a grudge against Jeannie-May.”— Boone shot Jeannie

Novac settlers are local residents living in Novac in 2281.

Novac settlers are denizens of the Mojave Wasteland who have taken up residence in the settlement of Novac. They live under the protection of former NCR 1st Recon snipers Craig Boone and Manny Vargas. Most of them make their living growing crops or scavenging the local REPCONN test site to the west, trading their finds to the traveling merchants that pass through the town from time to time. Most of the settlers are friendly folks but some are slightly less willing to talk with strangers. They heavily rely on the water merchants that pass through their town.

A settler at work
Add a photo to this gallery
Retrieved from "https://fallout.fandom.com/wiki/Novac_settler?oldid=3232185"
Community content is available under CC-BY-SA unless otherwise noted.