Classic Inspiration
Come Fly With Me
One for My Baby
Talent Pool
They Went That-a-Way
Andy and Charlie
Old School Ghoul
Straus Calls
The Screams of Brahmin
We Must Stop Meeting Like This, II

Fallout: New Vegas
“Novac? Nice enough place I suppose... but between you and me - when I rolled into town my skin started to itch. Watch yourself.”— Victor

Novac is an independent town in the Mojave Wasteland in 2281. It is located south of the Gibson scrap yard and north of the Viper's encampment along Highway 95.

Established alongside Highway 95 before the Great War, the town of Novac was once just a small stopover point for travelers looking for a restroom, a motel, or a coolant refill on the way to the REPCONN test site.[Non-canon 1] Dinky the Dinosaur and the "World's 2nd Largest Thermometer" served as a novelty roadside attraction.[Non-canon 2]

After the Great War, the motel and surrounding area was resettled and Novac was founded, taking its name from the broken sign by the entrance.[1][Non-canon 3] The town is protected by two NCR Army veterans, Craig Boone and Manny Vargas, who use the Dinky the T-Rex statue as a sniper's nest to eliminate any threats at long range.[Non-canon 4] Ranger Andy has stationed himself in the town to aid in its protection, following injuries he sustained that have forced his early retirement.[Non-canon 5]

In terms of commerce, Novac's proximity to the REPCONN test site and the sizable supply of salvage found there allows the town to maintain a stable trading outfit.[2] Recent developments, such as the growing threat of Caesar's Legion, the arrival of the Bright Brotherhood as well as the feral ghouls that block the road to REPCONN, have caused concern that this might threaten the town's livelihood.[2][3]

Due to the recent shut down of parallel I-15, caravan traffic on Highway 95 has increased and subsequently provided the town with additional traffic, including traders, threats, and allies alike.[4] In terms of allies, the residents of Novac are appreciative of the extra protection afforded by the New California Republic as of late, but remain untrusting of outsiders.[Non-canon 1]

Novac consists of a residential area with several houses, including Jeannie May Crawford's house, the McBride house, No-bark's shack, and a house where Novac settlers reside. There are three bungalows inside the motel compound as well. The middle house belongs to Ranger Andy and the southernmost house is owned by Cliff Briscoe, the third being inaccessible. The landmark dinosaur, Dinky the T-Rex, containing the Dino Bite gift shop is to the south of the bungalows.

The main part of Novac is the Dino Dee-lite Motel area, consisting of seven accessible motel rooms and the front desk, where a room can be rented from Jeannie May Crawford for 100 caps. Alternatively, she will give the Courier a room free of charge once they attain "Accepted" status in the town. Cliff Briscoe will rent out rooms in Jeanie May Crawford's place if she were to die.

The motel room the Courier can rent is located up the stairs on the immediate left after entering the motel compound. There are two vacant rooms and the others are inhabited by Manny Vargas, Boone, Daisy Whitman, and Bruce Isaac.

Across the street from the motel is a gas station with a workbench and a reloading bench, one of two places where Dr. Ada Straus serves as a merchant, the other being down the road near the McBride's. In and around the gas station are several REPCONN rockets, including the V29-321G, R77-293A, and Z43-521P models.

The closest campfire is located to the northwest, in a cave past a water tower and radio tower. There are two graves accessible with a shovel beside one of the residences that run parallel to the motel's main building, as well as a kitchen tent that traveling merchants rest in front of. As with all graves, walking near them will trigger faint, ghostly whispering. Near the gravesite is a shanty that contains a usable workbench and some crafting materials on a shelf.

Narrated by Jeannie May Crawford

Road heading into Novac from the west

Side view of Dinky

Workbench shack to the north

Have to wait our turn 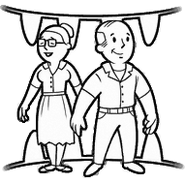 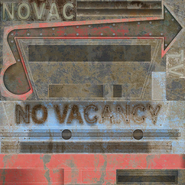