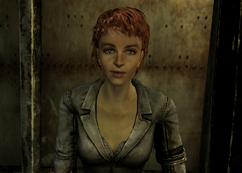 “Ohhh. You like it rough, huh? Well, that costs extra. Beat it kid. Go look for daddy somewhere else.”

Nova is one of Megaton's residents. She works as a prostitute at Moriarty's Saloon.

Nova was born in 2252. At the age of 25, she spends most of her time hanging around the bar talking to the male clientele. Every now and then, she'll go up to a room with a new "friend." Her real job is to sweet-talk the male patrons and get them to spend money - on booze, company, or an outrageously priced bed for the night. One day a week -her day off- she goes shopping.[1]

It is implied that she has lived in Megaton about 5 years, since she was twenty years old[2]. She eventually made the mistake of borrowing money from Moriarty and has been filling the role of courtesan to pay him off ever since.

Nova works at Moriarty's Saloon as a prostitute to pay back the debt she owes Colin Moriarty. She hangs around the saloon's first floor talking to the locals and the Lone Wanderer. For 120 caps a room can be rented with her.

If Moriarty dies, Nova announces that she has quit her service and will find a better job. She is implied to have taken over Gob's job as she still hangs out inside the pub, and sleeps there as well. If she is paid for a room for the night at Moriarty's Saloon after his death, Nova will still be in the same bed when the Lone Wanderer wakes up, despite having "quit."

Nova appears only in Fallout 3.

Retrieved from "https://fallout.fandom.com/wiki/Nova?oldid=3240277"
Community content is available under CC-BY-SA unless otherwise noted.