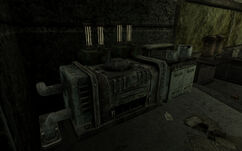 “We've been scrapping together quick-fixes to keep it running for months. I think it finally crapped out and needs a full overhaul.”— Cpl. William Farber

Not Worth a Hill of Corn and Beans[1] is an unmarked quest in Fallout: New Vegas.

This quest is given by Cpl. William Farber on the concourse at Camp McCarran. He asks you to help fix the food processor, and gives you a list of the parts necessary to fix it. You can either jury rig the fix (Repair skill of 80 required) or find these items:

The reward given is a discount on his (limited) food merchandise, and 80 XP if the Repair skill check is passed.

The phrase "hill of beans", meaning something that is not worth much, was popularized by actor Humphrey Bogart in the 1942 film Casablanca.

Occasionally, it doesn't allow you to fix the processor even if you have all the parts, one more part is needed. You will need one extra pot in your inventory, only one pot will be removed when fixing the food processor. [verified]

Retrieved from "https://fallout.fandom.com/wiki/Not_Worth_a_Hill_of_Corn_and_Beans?oldid=3394057"
Community content is available under CC-BY-SA unless otherwise noted.