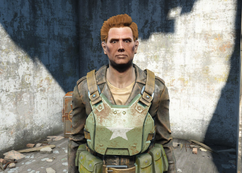 Northy is one of the targets for the Silver Shroud side quest. He can be found just south of Wattz Consumer Electronics.

Northy is, just like Smiling Kate, one of Sinjin's gang members. Unlike Smiling Kate, Northy attempted to hide and fortify a small building with defenses in response to other named gang members being killed off by the Sole Survivor in the guise of the Silver Shroud. He will be audibly distressed when encountered but will still attempt to attack.

Northy appears only in Fallout 4.

Retrieved from "https://fallout.fandom.com/wiki/Northy?oldid=3176894"
Community content is available under CC-BY-SA unless otherwise noted.