Fallout: New Vegas
Honest Hearts
“Howdy. My name is Jed Masterson, and I'm a caravan boss for the Happy Trails Caravan Company. If you're hearing this, I have a job offer for you. ... If we like your gumption, we'll pay you square and treat you fair. Find me, Jed Masterson, at the Northern Passage if you're interested. Luck to you.”— Happy Trails Expedition Broadcast

The northern passage is a location in the Mojave Wasteland in 2281. It is located north of North Vegas Square. It serves as the starting point for the Fallout: New Vegas add-on Honest Hearts, as well as a checkpoint for the path to Zion Canyon.

A grave and a hollowed-out rock containing random minor loot can be found near the cave entrance. The rock has "The sun is killing me" written on it. Two banana yucca plants grow near the cave entrance. The northern passage is inaccessible, covered by a barrier of fallen rocks before Honest Hearts has been installed. Afterward, the rocks have been removed, allowing passage to Zion.

The passage's interior consists of wooden supports, hanging lanterns, and an empty crate on the left. The crate is labeled "Happy Trails Shipping Crate" and is used to store items while traveling to Zion.

The Happy Trails Caravan Company expedition members are preparing to leave inside the cave, including caravan boss Jed Masterson and hired hands Stella, Ricky, and two Happy Trails caravan guards. If the Courier alienates Ricky prior to the expedition leaving, a third caravan guard will take his place.

If the Courier attempts to advance to the end of the cave and leave for Zion Valley without the caravan, a note will read "You will need to travel with the Happy Trails Caravan on your first journey to Zion Valley" and refuse access. If attempting to attack or pickpocket the caravan members, they will not sustain any damage nor acknowledge the attempt.

The northern passage appears only in Fallout: New Vegas and serves as the entrance to Zion Canyon in the add-on Honest Hearts.

The Northern passage is situated in the same geographical location as the real world June Bug Mine, at the foot of Gass Peak, bordering the city of North Las Vegas, Nevada. June Bug Mine is one of the locations that served as a municipal fallout shelter in real life.[1] However, the actual connection between the Mojave Desert and Zion National Park is northbound Interstate 15, as likewise mentioned in the Happy Trails Expedition Broadcast.

The interior of northern passage, without Honest Hearts 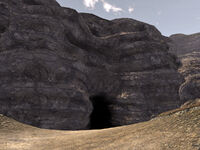 The passage as it appears in Honest Hearts, cleared of rubble