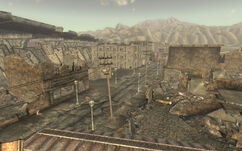 “We're independent folks here. Merchants, gamblers, NCR whores, all of them trade with us and we offer protection against critters and the Fiends.”— Jules

The North Vegas Square is a trading settlement in the Mojave Wasteland in 2281.

The fragmented citizens of New Vegas have sealed themselves into different defensible quadrants. One such location is North Vegas Square. Established a few years ago by wastelanders looking for a place to call their own, this fortified position is more camp than settlement.[1] They are led by Crandon,[2][3] who patrols the streets, with Jules and a few others, to keep the unwanted murderers, rapists, extortionists, and everything in between away.[4][5]

The people of North Vegas square survive through trade. They usually exchange protection from critters and the Fiends that crawl into Vegas through the sewers and endanger merchants, gamblers, and NCR citizens who pass through the area.[1][6][7] They maintain their independence, but the lack of a powerful backer means most North Vegas residents are wary of strangers, particularly the leaders of the community.[8] The NCR is particularly disliked among the residents of North Vegas, seen as a selfish, bloated monster that only cares about its own people and grinds everyone else into a fine red mist beneath the boots of its troopers. The people of North Vegas work the land, own the streets, and enforce their own brand of frontier justice without the Republic and are not about to turn it over to the Republic for a smile and a prayer.[9] They see themselves as tougher than NCR citizens, believing the latter to be softened by their easier lives.[10]

However, those who can handle themselves, are willing to work and demonstrate thrift are welcome to come to the square and look for work. The leaders respect those who do not "squander [their] wealth like those fools in the Strip."[11]

The square is a run-down part of New Vegas, surrounded by a makeshift wall erected from salvaged metal sheets, neon signs, and junk, centered around a single road passing through in a west-east direction. Most of the buildings are derelict, burned-out ruins with makeshift beds spread out among the debris to accommodate the residents.

Crandon and Jules patrol the streets, keeping the city punks away and clearing out anyone who decides to take up residence where they do not belong. There is a single intact building, called the Gray, and a manhole leading down to the north sewers. Both are part of the community and fall under the self-proclaimed jurisdiction of Crandon.

The .44 Magnum, hand load schematics can be obtained here by completing the unmarked quest Meeting an Equal.

Map of the North Vegas Square

Retrieved from "https://fallout.fandom.com/wiki/North_Vegas_Square?oldid=3405441"
Community content is available under CC-BY-SA unless otherwise noted.