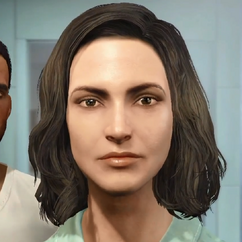 “How are the two most important men of my life doing?”

Nora is a pre-War resident of Sanctuary Hills in 2077 and one of the two possible player characters available during character creation in Fallout 4.

At some point before 2077, she married Nate[2] and had a child, Shaun. She earned a law degree at Suffolk County School of Law and was working as an attorney prior to the war.

On the morning of October 23, 2077, Nate was preparing to go to an event at the Veteran's Hall in Concord. While getting ready, a Vault-Tec representative visits the family with pre-approved admission into Vault 111.

Mere moments later, a news bulletin warns of an imminent nuclear attack, which forces Nate, Nora, and Shaun to rush to the vault prior to a nuclear bomb detonating nearby, leaving their Mister Handy, Codsworth behind at the House of Tomorrow. After entering the vault, the family, alongside the other admitted residents are placed in cryo-sleep under the guise of decontamination before entering the main vault by Vault-Tec scientists

In 2227 her cryogenic sleep is disturbed by Conrad Kellogg and two Institute agents whose intentions are to acquire Shaun as the 'purest' source of human DNA available.

If Nora was selected as the player character she is forced to watch as her husband, Nate is murdered by Kellogg while trying to prevent Shaun's kidnapping by the Institute. If Nate was selected she will be murdered instead.

Nora appears only in Fallout 4.

In the CGI intro and the Art of Fallout 4, Nora is depicted with red hair as she was based on the English actress Diana Rigg. Her default in-game appearance depicts her with dark hair.

Nora, with her trusty companion Dogmeat, wandering into the wasteland

Nora in the Fallout 4 intro

Pre-War photo of Nora and Nate near Bunker Hill, from The Art of Fallout 4

Retrieved from "https://fallout.fandom.com/wiki/Nora?oldid=3416555"
Community content is available under CC-BY-SA unless otherwise noted.