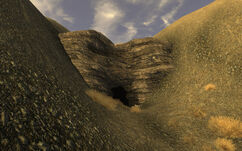 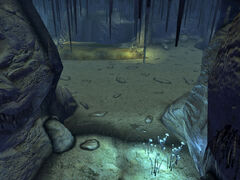 Nopah Cave is a small cave located in the Mojave Wasteland, southeast of Chance's map.

These ancient caverns were once famed for trilobite fossils, but fire geckos roam here now.[1]

Nopah Cave is quite small. It has a narrow passage way leading to an empty chamber. The chamber branches off into other chambers, each with a moderate amount of fire geckos (typically 7 to 9). In the back of the left chamber, there is a dead super mutant master lying face down with a badly damaged Fat Man in his inventory. However, there are no mini nukes to be found in the entire cave. There are several skeletons in the cave, including one near the super mutant with a bag named "Adventurer's Pack" which contains some loot. Also seen is the severed head and chest of a man.

Nopah Cave is based on real world location Nopah Range, a mountainous region on the western Nevada border with California.

It's possible for the super mutant master to respawn after three days (with another Fat Man and other random loot) and only have one health block. The geckos inside the cave will not respawn but those outside the cave will. [verified]

Retrieved from "https://fallout.fandom.com/wiki/Nopah_Cave?oldid=3122188"
Community content is available under CC-BY-SA unless otherwise noted.