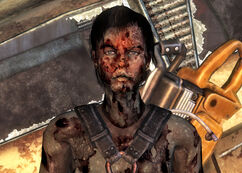 “Oh, honey. You're pretty banged up there.”

Nola is a Pitt slave in the Pitt Downtown in the year 2277.

Nola tends to the sick, crippled, and wounded of the Mill's workforce when she is not taking a beating herself. She has rudimentary medical training, which she can apply to the Lone Wanderer, although she is the least-skilled practitioner they have ever met (not including Sawbones, of course).[1]

Nola spends her time in the grinding hole in the middle of Downtown, slicing at an old car and dodging shots from the slave master.

When being healed by Nola, there is a risk of one of the Lone Wanderer's limbs being crippled because of the poor work conditions in the Pitt.

Nola appears only in the Fallout 3 add-on The Pitt.

Retrieved from "https://fallout.fandom.com/wiki/Nola?oldid=3347601"
Community content is available under CC-BY-SA unless otherwise noted.