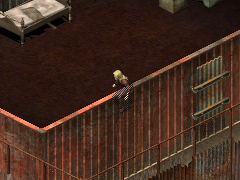 “Hey, I always have time to chat with someone who doesn't want to end my life! Things have been pretty dangerous around here with all the robots, but I watched a strange sight a week ago. One of the robots wandered through one of the derelict buildings and a wall collapsed on it. It was pinned down and trapped. It's still there, in one of those buildings, humming away, making all sorts of weird sounds. I think it upset the other robots, too. They all started acting upset, running around and even bumping in to each other. Almost act like real people, huh?”

Noelene Campbell is one of the inhabitants of Great Bend in 2197.

Noelene is the last survivor of her family after an attack on her hometown by the Calculator's robots. She was once a happy home-maker and scorpion-killer, now she is one of the destitute masses.

Noelene's role in the mission is to provide the Warrior with a clue to the robot that was immobilized and broken by a steel yard cart that had fallen on it.

Retrieved from "https://fallout.fandom.com/wiki/Noelene_Campbell?oldid=3299543"
Community content is available under CC-BY-SA unless otherwise noted.