No-bark's shack is a location in the outskirts of Novac, belonging to No-bark Noonan in 2281.

The building consists of one room. Tin cans and empty soda bottles litter the ground, and many empty Nuka-Cola bottles hang on ropes, dangling from the ceiling. Touching the bottles will cause them to fall. There is a rigged shotgun pointed at the door, but it will never go off, as there is no tripwire to trigger it.

There are also several mannequins posted behind sandbags in the center of the shack, one wearing a baseball cap and a baseball glove. The other is equipped with a metal helmet. 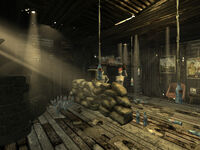