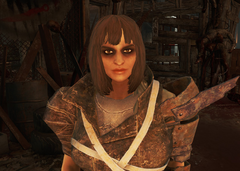 Nisha without her helmet

“Someone decided to act without my approval - and as punishment, I decided to spare the collar and go straight for the execution.”

Nisha is the leader of the Disciples in Nuka-World in 2287.

Nisha is a psychopathic cut-throat, who expresses these traits and hatred for Porter Gage by constantly threatening to slit his throat.[1] In the first conversation with the player character, Nisha also expresses her hate for Colter and love for the Gauntlet.[2]

Nisha also has little respect for rules, stating that people stopped caring about rules when they started bombing each other. Her only rule is: "Don't get caught."[3][4]

She is the only member that keeps the Disciples in line, meaning that if she is left out of the picture then the Disciples will get out of control in the Nuka-World theme park. Because of this, even Mags Black of the Operators supports Nisha remaining in the position of power.[5]

As a child, Nisha was originally taken under the wing of a raider named Sledge, who "accidentally" killed her parents. After training and raising her, Sledge at some point left her for dead. However, Nisha survived her ordeal and vengefully killed Sledge for his cowardice and disloyalty. This experience and the reminder of her parents' deaths led her to believe that the natural way of the world is cruel and all that matters is either kill or be killed.[citation needed]

Nisha appears only in the Fallout 4 add-on Nuka-World.

Nisha's name means "night" in Sanskrit, alluding to her preference for darkness.[6]