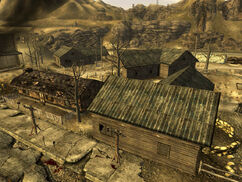 4 of the 8 Nipton houses

The eight Nipton houses are locations in the Mojave Wasteland.

There are four distinct types of houses in the town, aside from those which have been completely destroyed. Most have the basic facilities, such as seating, bedroom, a kitchen, workspaces, and bathrooms. One of the houses is occupied by a hostile Mister Gutsy prototype, while another one is booby-trapped with caged bark scorpions in the first room, and tripwire-activated single shotguns at the doorways.

The smaller, white houses are not rectangular in the inside as the outside of the building would suggest.

The Nipton houses appear only in Fallout: New Vegas.

Declaration of Vital Essence
Add a photo to this gallery
Retrieved from "https://fallout.fandom.com/wiki/Nipton_house?oldid=3166626"
Community content is available under CC-BY-SA unless otherwise noted.