Nipton Town Hall is a building in Nipton, located in the Mojave Wasteland in 2281. The hall is located at the northern side of the area, and outside of the main entrance is where the Courier can engage with members of Caesar's Legion.

The civic center of Nipton, facilitating meetings as well as housing the mayor's office.

The town hall is composed of three floors and a basement, which are booby-trapped with frag mines. The only enemies inside the hall itself are a number of Legion mongrels which will attack the Courier if they do not have the Animal Friend perk.

A worn key can be found behind the reception desk, which unlocks the Hard locked door to the cellar. The door is located directly past reception to the right. Down the staircase, there is a sitting area, vending machines, a large amount of scattered food and some Turbo. A first aid kit can be found on the wall and five lottery tickets on the floor and table.

Behind the double doors leading to Nipton, one will enter the reception area. The remains of the town's citizens are strewn about on the floor and over furniture. A frag mine is located behind the front desk.

In the corridor, more remains can be found, amid discarded lottery tickets. There are two staircases, on both sides of the main corridor. The eastern steps have the remains of both a mongrel and a wastelander.

On the second floor, one will find a large assembly hall with chairs lining the perimeter, a raised platform and a long table. There is a body booby-trapped with a frag mine in the office across from the eastern stairs. Offices flank the main hallway. Six more lottery tickets can be found throughout the assembly hall.

The third floor has a different layout than the preceding two, containing the mayor's expansive office behind two executive offices. In the hallway, one will find vending machines. Throughout the executive offices, there are refrigerators with food and drinks, as well as first aid kits on the walls.

The mayor's office is ornate, with a desk containing his terminal and cabinet behind containing a copy of Big Book of Science, Future Weapons Today and Programmer's Digest, along with Mentats next to a stack of lottery tickets. The shelf also contains a laser pistol. Behind the desk is an Average locked door revealing a closet containing a gun cabinet and shelving with more supplies, including a bottle of Nuka-Cola Victory, cartons of cigarettes, a 10mm pistol and ammunition. 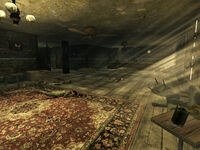 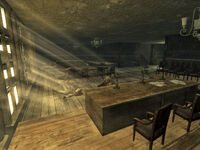 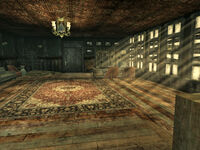 Caravan barricade behind the town hall