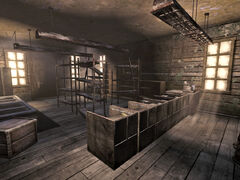 The Nipton Road reststop is a location in the Mojave Wasteland in 2281. It is located on the junction of I-15 and Nevada State Route 164, south of Primm and the Nevada Highway Patrol station.

The area consists of the Nipton Road general store, a destroyed house to the south, and an inaccessible house to the north. The area is infested with several radscorpions of various sizes. In front of the store is a large, destroyed vehicle containing two ammunition boxes. There are no enemies inside the general store, but the player character will find Mayor Steyn's "secret stash," consisting of several sacks and a locked gun cabinet, as mentioned on the terminal in his office in Nipton Hall.

The Nipton Road reststop appears only in Fallout: New Vegas.