The Nipton Road pit stop is a location in the Mojave Wasteland in 2281. It is located west of Nipton and due south of Ivanpah race track along Nevada 164.[1]

The area consists of a couple of destroyed buildings, a campfire with some healing powder beside it, and some makeshift beds. It is occupied by several members of the Jackals and a Jackal leader who will try to ambush the Courier as they travel through this area. 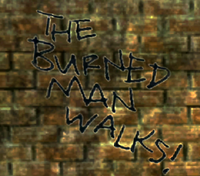