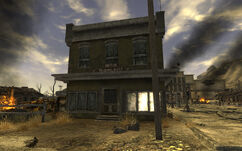 The Nipton General Store or Nipton Trading Post is a building in Nipton, located in the Mojave Wasteland.

The general store has two levels, one of which was commercial and one residential. Boxcars (who gives you the quest Booted) is sitting on a chair on the first floor, surrounded by toppled over food items in the commercial section. Upstairs, past an Easy locked door, is an abandoned apartment containing a safe.

The Nipton General Store appears only in Fallout: New Vegas.

The Nipton General Store is based on the real world location Nipton Trading Post in Nipton, California. Notably, the signage above the door matches the in-game location almost exactly, with the exception of the mining icon flipped to mirror the other in the real world equivalent.

There is a Salesman Weekly magazine nestled under the counter, but sometimes it cannot be interacted with. 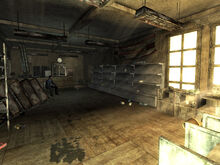 Add an image to this gallery
Retrieved from "https://fallout.fandom.com/wiki/Nipton_General_Store?oldid=3153554"
Community content is available under CC-BY-SA unless otherwise noted.