They Went That-a-Way
Booted
Cold, Cold Heart
Keep Your Eyes on the Prize
Wheel of Fortune

Play sound
City of the Dead.ogg
“Nipton was a wicked place, debased and corrupt. It served all comers, as long as they paid. Profligate troops, Powder Gangers, men of the Legion such as myself. The people here didn't care. It was a town of whores. For a pittance, the town agreed to lead those it had sheltered into a trap. Only when I sprang it did they realize they were caught inside it, too.”— Vulpes Inculta

Nipton is a small town of the southern Mojave Wasteland ravaged by Caesar's Legion in 2281.

Ranger Ghost, an NCR sniper found on the roof of the compound at the Mojave Outpost, may ask the Courier to investigate the lack of traffic from their direction, but the smoke could already be seen from a distance by anyone.

Before Caesar's Legion hit the town, it was populated by gamblers, thieves, and prostitutes under the leadership of the corrupt and vainglorious Mayor Joseph B. Steyn. The town maintained a kind of neutrality, offering its services to NCR soldiers in the night and Powder Gangers in the day. Even men of the Legion were allowed in, so long as they paid. Mayor Steyn had hatched a plan with "Mr. Fox"- actually Vulpes Inculta- to trap some NCR soldiers and Powder Gangers for the Legion in return for a sum of 8,000 caps. What Steyn didn't know was that Vulpes had come up with the brilliant idea to have a lottery to "educate" all of Nipton. The winner was spared, the runner-up was crippled, the third and fourth place winners became slaves, the "Lucky Losers" were decapitated for a quick death, some (including Mayor Steyn) were burned alive on a pile of tires, and the rest were crucified.

Upon arrival the player is greeted by Oliver Swanick, an ex-Powder Ganger who won the lottery to save his life. Alternatively, if the player stumbles upon the town hall first, Vulpes Inculta (Gabban appears if Vulpes is killed before the player enters Nipton) either greets the player or becomes hostile if the player is wearing NCR gear. Venturing through the settlement, the player will see multiple crosses holding the losers of the lottery. The rest of the town is in ruins and burns as you walk the streets.

Outside of Nipton Hall is a crucifix along with skulls on a post and a pyre. Vulpes Inculta meets the Courier outside of the hall and tells them to spread the word of Caesar's Legion. After speaking to him the quest Cold, Cold Heart begins. Alternatively, if the Courier is clothed in NCR faction armor, Vulpes and the other legionnaries will be hostile and attack on sight. Inside the hall itself, one will find many Legion mongrels. They are automatically hostile, even if dressed as a member of Caesar's Legion, but do not give the player character Legion infamy if killed.

A man named Boxcars sits inside the Nipton General Store. He will speak about what happened, and the quest Booted can start. Even though both of his legs are crippled from the "lottery," Boxcars will still engage in combat if attacked.

The house with the sand bags in front of it is heavily booby trapped; there are frag mines in the corner of the living room, kitchen and the bathroom. Both of those doorways conceal shotgun traps. There is a cage with three bark scorpions inside once entering the house. There is an Easy-Locked safe with a grenade rifle in it; if the pressure plate on the way to it is triggered, the scorpions will be released. The Average-Locked cabinet in the kitchen contains some provisions, and there is a dead legion recruit with a machete, armor and a helmet.

A campfire can be found in the trailer area, proceeding south by south-east of the Nipton General Store. 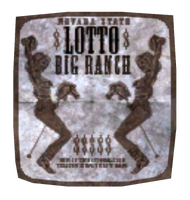 Lottery ticket
Add an image to this gallery
Retrieved from "https://fallout.fandom.com/wiki/Nipton?oldid=3100021"
Community content is available under CC-BY-SA unless otherwise noted.