“They serve the Master. They bring the pain of healing to the world. Angels in the night, who redeem the world by bloodshed. Curiosity is a foolhardy emotion, but doubly so when it comes to the Nightkin.”— Lasher, in Fallout

They are superior to their fellow super mutants in terms of both intellect and skill, as the FEV-II dipping has not damaged their intelligence. While in the Master's Army, they had access to superior weapons and armor, including the use of Stealth Boys. Prolonged use of these devices led to a permanent alteration of the pigment in their skin. Instead of the usual dull green, their skin is pale blue in color.

The nightkin often use their equipped Stealth Boys to sneak-attack those who cross their path, remaining invisible until they come out and fight, sometimes even remaining invisible then. However, prolonged use of Stealth Boys has damaged their sanity, with them becoming incredibly aggressive, paranoid, and in some cases severely delusional. As Marcus explains, they "hate to be seen". The cause of their paranoia is schizophrenia developed from constant use of the Stealth Boys, because of this they can become angered when stared at for a long period of time.

Nightkin can be found in the upper levels of the Cathedral, as well as inside the Mariposa Military Base, and in random patrol encounters in the cells around the base. After the Master's fall, many surviving Unity super mutants had become a chaotic wasteland wandering force, set on to destroy everything it encountered. They are superior to other super mutants in skill, equipment, and weaponry. Many of the nightkin are equipped with cloaking devices, such as Stealth Boys. The only gaming effect of this is to give them a slight ethereal look, as it does not affect the player's chance of hitting them.

After the death of the Master, parts of the super mutant army gathered and formed a new faction, led by Attis. Many years after their regrouping, these mutants captured the Secret Vault in order to use the FEV reserves stored inside. Attis' goal was to continue the Master's plan. His army had an elite unit of nightkin, much improved in skill, and equipped with high-tech stealth suits to enhance their abilities. These suits served the same function as Stealth Boys. These suits probably originated from, or were made in the Secret Vault.

Some of the nightkin appear in the Mojave Wasteland, very often suffering from severe psychological damage, caused by prolonged Stealth Boy use. They wear the same clothes as regular super mutants, but many of them also wear hoods, and stop signs strapped to their forearms as makeshift shields. They are often found wielding rebar clubs, miniguns, incinerators, super sledges or, in the case of nightkin masters, bumper swords. They are slightly more articulate in their speech, and are believed to be a stronger and more intelligent version of first generation super mutants, according to Black Mountain Radio. They are weaker than standard super mutants, however, as a result of their use of Stealth Boys.

There are some scattered in the wasteland, in places such as Black Rock cave.

Those nightkin under the banner of Tabitha harbor an "isolationist" ideology, openly warning humans to stay away from Black Mountain, and even commenting on the dangers of "the dreaded battle cattle" and "two-headed bear people", a reference to the animal mascots on the flags of Caesar's Legion and the New California Republic, respectively. A nightkin camping on the outskirts of Novac kills one of Dusty McBride's brahmin every night around midnight, mistaking the message entirely. He can be found during the day, cloaked behind a boulder across the road and to the west of town. Here, he can be heard complaining about his constant insomnia and trying to silence noises in his head that he believes come from the brahmin. Despite their phobia, some nightkin have become Antlerists, and take orders from their god, Antler, an inanimate brahmin skull located in the basement of the REPCONN test site.

The companion, Lily, is a nightkin and a former soldier in the Master's army.

Nightkin play an important part in the quest Come Fly With Me. The Courier is sent by Jason Bright, the founder of the Bright Brotherhood, to take care of "demons" that are infesting the basement level of the REPCONN rocket testing facility.

Similar to the super mutants in Fallout 3, nightkin will attack ghouls.

At Brooks Tumbleweed Ranch a nightkin will appear next to the Courier and start a chat. He will offer to sell them wind-brahmin for all their caps. If the offer is declined, he will turn hostile and proceed to attack. Originally, if the Courier accepts the offer without asking about the price, no caps will be removed, and the nightkin will give a free Stealth Boy instead. Another Stealth Boy will be in his inventory available for pick-pocketing. However, with the game patch as of July 7–8, 2011, the nightkin will no longer give a Stealth Boy upon agreeing without question, and will take all caps. The nightkin will only have one Stealth Boy that can be pickpocketed or looted from his body.

Another nightkin, Dog and his "human" personality God, appears in the add-on Dead Money. Although he does not use Stealth Boys, he is still a formidable fighter.

The nightkin appear in Fallout in the Cathedral and the Mariposa Military Base, in Fallout 2 as a hostile encounter on the world map, in the Secret Vault in Fallout: Brotherhood of Steel, and make a comeback in Fallout: New Vegas and the add-on Dead Money.

A nightkin without his Stealth Boy, as they appeared in Fallout 2

Lily, a friendly nightkin and companion in Fallout: New Vegas

Keene, a schizophrenic nightkin in the Jacobstown lodge 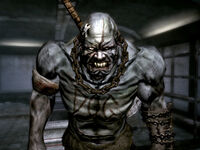 Dog and God, a nightkin in Dead Money 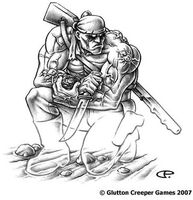 The nightkin class in Fallout d20. 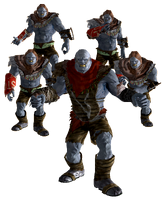 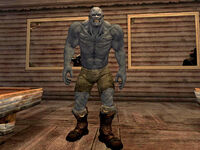 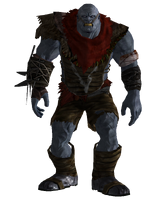 Add an image to this gallery
Retrieved from "https://fallout.fandom.com/wiki/Nightkin?oldid=2675231"
Community content is available under CC-BY-SA unless otherwise noted.