Bleed Me Dry
Guess Who I Saw Today
Fight Night

Night stalkers (sometimes spelled "nightstalkers") are creatures living in the Mojave Wasteland and Big MT in 2281.

Night stalkers are the pre-War creations of Dr. Borous at Big MT, being genetic hybrids of rattlesnake and coyote DNA. Dr. Borous created them in order to preserve the DNA of rattlesnakes, which he believed to be on the verge of extinction. However, his memory was unclear, and he also suggested that it may have been because of a dare with Dr. Calis at X-13.[2]

Due to their creation, the shipping department of the X-8 research center suffered a large number of fatalities, where all but one employee (Skippy) were killed by the night stalkers.[3] However, Dr. Adam Figgis thought the executives in charge of X-8 could salvage the mishap in shipping and decided to let the night stalkers loose into the X-8 testing area to study their behavior.[4] Sometime after the bombs dropped, many night stalkers escaped and have spread across the Mojave and beyond, with some even reaching as far as Baja.[1] Night stalkers occasionally clash with cazadores (which were also created at Big MT) over territory.

“You may know me as the Head Chief First Researcher of Labs Z-9 and Z-14. There I fought valiantly to preserve rattlesnake DNA, and put it right where it belongs, in the husk of another feared predator. Oh, and the tarantula hawk. Can't splice enough, I always say, Especially if you can make a magnificent Cazador!”— Doctor Borous

Nightstalkers are an amalgamation of the coyote and rattlesnake, displaying characteristics of both. They growl, howl and whimper like regular coyotes, but hiss, rattle and inject venom into their prey like rattlesnakes. Their bodies are mostly dog-like, covered in a combination of fur and scales. Their heads and tails, however, are more like that of a rattlesnake, including fangs and a forked tongue. Night stalkers' right eyes are blue with a round pupil, while their left eyes are yellow with an elliptical pupil, like a rattlesnake's. They lay eggs, like a snake, but raise their pups similar to a coyote, nursing their young in cave nests.

Night stalkers nest in caves across the Mojave Wasteland and can be found both inside the cave or in the nearby area. Packs of night stalkers can be frequently seen hunting at night east of Morning Star Cavern near the nest with the radscorpion queen, south of the broc flower cave and northwest of the cap counterfeiting shack. Their original breeding ground is the Z-9 Crotalus DNA preservation lab, located in the Big MT.

As their name suggests, night stalkers are largely nocturnal,[5] hunting in packs at night for unaware or sleeping prey. However, it's still possible to encounter night stalker packs during the day.

Night stalker eggs can be used to prepare Mushroom Cloud. Their blood is also used as an ingredient in antivenom, hydra and nightstalker squeezin's.

When they detect the Courier, they may strike with a leaping attack and a venomous bite, or snap at them without leaping. While the venom is not as potent as that of their main competition, the cazador, it can pose a serious problem if multiple bites are received and aren't promptly treated. However, this can be avoided with the Animal Friend perk, as night stalkers will not attack the Courier.

Night stalkers can pose a particular threat in areas of low visibility, at night (when they are active) or in caverns. They are especially dangerous inside their dens, where packs are usually large in numbers, and twisting corridors make it difficult to detect exactly where they are.

Night stalkers found in the Charleston Cave and the lower level of the X-13 research facility have the ability to cloak as if using a Stealth Boy. The ones in the Charleston Cave gained this ability from chewing on a Stealth Boy, while the ones in the X-13 testing facility had the ability granted by an unknown scientist. As with any other cloaked enemy, these night stalkers can only be targeted in V.A.T.S. with the Enhanced Sensors companion perk provided by ED-E. Their invisibility will not prevent them from causing ripples in any body of water they move in, hindering their ability to execute an ambush attack.

Night stalker packs can be found in:

Night stalkers are the size of coyotes with a canine body and the head and tail of a rattlesnake. Night stalkers nest and hunt in packs and are found in or near their cave nests. 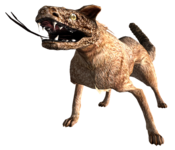 The legendary night stalker is a large and powerful variant found in Bloodborne cave, located west of Bitter Springs. In appearance, it is visually identical to standard night stalkers but differs only in size, being about the size of a bighorner. It is normally encountered in a pack with several regular night stalkers and young night stalkers and can kill a low level player in seconds.

It has the least amount of health out of all of the legendary creatures, but can kill a player under level 20 with about two to three bites. It is also the only legendary creature in the game that can be friendly towards the player if they have chosen the Animal Friend perk.

In some night stalker nests, such as Morning Star cavern, the pack will be led by a den mother, a slightly larger night stalker who looks after the young, and has a much stronger attack than standard night stalkers. If her young are harmed, she may go into a frenzy similar to that of the deathclaw mother. 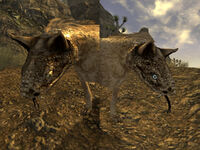 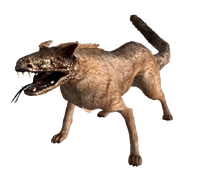 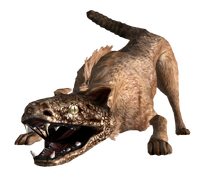 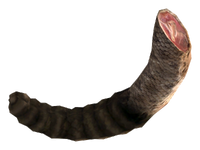 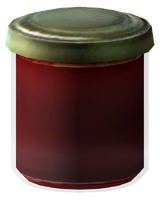 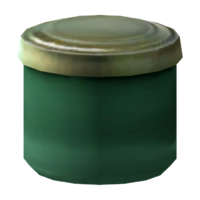 As seen in DNAgent 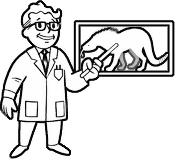 As seen in Mile in Their Shoes 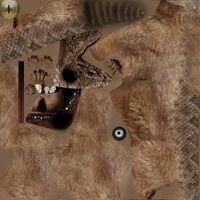