“All your enemies pop out like fireflies.”— Fallout: Brotherhood of Steel 2 design document

Night-vision goggles are a piece of cut headwear in Fallout 3, Fallout: New Vegas and Fallout Tactics and were to appear in Van Buren and Fallout: Brotherhood of Steel 2.

Meshes and an inventory icon for night-vision goggles appear in the Fallout 3 resource files but are unused. The goggles were meant to go along with the merc veteran outfit and have different models for male and female heads.

The Peepers are another pair of night-vision goggles which were cut from Operation: Anchorage.

The graphical assets from Fallout 3 for the night vision goggles do not remain in the Fallout: New Vegas art files (except the inventory icon). The model folder contains .egm files (used in Gamebryo engine games to modify equipment placement, i.e., on male and female-shaped heads) which were not present in Fallout 3 data. Some night vision functionality can be seen in the varmint rifle night scope and Ghost Sight in Dead Money. Also in the hazmat darklight cowl from Old World Blues.

Night-vision goggles were set to appear in Fallout Tactics, but were cut from the final release.

Wearing night-vision goggles creates a green filter over the screen and enemies will glow allowing the user to see them after sundown or in poorly lit areas.[5] 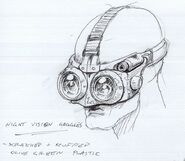 Retrieved from "https://fallout.fandom.com/wiki/Night-vision_goggles?oldid=3186778"
Community content is available under CC-BY-SA unless otherwise noted.