00000148
“They claim to want peace, like us. But anyone who disagrees with them just disappears. Their Dark God is not what he seems, believe me.”

Nicole is the head of a group of pacifists called the Followers of the Apocalypse by 2161.

Nicole is described as the intelligent and good hearted leader of the Followers.[1] Her vision is to restore peace to the world non-violently.[2][3][4] Her parents were killed by marauders on the way from the Glow to the Boneyard, which inspired the foundation of the humanitarian group.[5][6]

Nicole distrusts the Children of the Cathedral, who she believes are not genuine in their wishes to help the people of the wasteland.[7][8][9] Due to this distrust, Nicole has assigned fellow member Laura to serve as a spy, working inside the Cathedral.

Nicole appears only in Fallout.

"Greetings. Hey! We're very glad you could join us. We hope you have found our humble abode to your satisfaction."

"We never give up hope. We never will, even though most live by the gun these days. And we are concerned with the Children of the Cathedral..."

"Morpheus is the leader of the Children of the Cathedral. He is evil, and that fact must be exposed." 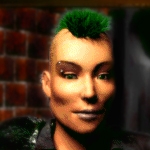