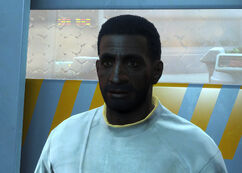 Newton Oberly is a scientist for the Institute in 2287.

Newton Oberly works in the facilities division of the Institute. He is in charge of housing and provisions. His job is to ensure that everyone in the Institute lives a comfortable and productive life. With this position, he cares deeply for all of his fellow inhabitants. He also expresses admiration for the stars on the ceiling of the facility when it is nighttime.

While Newton is friendly towards the people of the Institute and their synths, he is not fond of coursers. He does not tolerate the coursers conducting their unannounced security sweeps. When Newton tried to confront Dr. Justin Ayo about an incident involving coursers ransacking his quarters in the middle of the night, a courser denied Newton entrance to the Synth Retention Bureau, irritating him.

He is one of the main voices of reason, along with the Sole Survivor, in the Institute quest A House Divided.

Newton Oberly appears only in Fallout 4.

Retrieved from "https://fallout.fandom.com/wiki/Newton_Oberly?oldid=3177309"
Community content is available under CC-BY-SA unless otherwise noted.