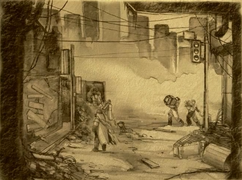 New York City was a pre-War city in the former state of New York.

New York was the location of the United Nations headquarters before it was disbanded on July 26, 2052.[1]

In 2065, a nuclear reactor, struggling to power the population of seventeen million people, went supercritical for a period of about five minutes. While there was no explosion, the NYC incident coined the term "hot summer" for a heat-related electrical overload on nuclear systems. The event mandated power rationing throughout the city.[2]

During the Great War, the city was affected by nuclear strikes.[3][4]

Gameplay screenshot from the holodisk game Atomic Command. On the lower right on the image, the Statue of Liberty can be seen
Add a photo to this gallery

Retrieved from "https://fallout.fandom.com/wiki/New_York_City?oldid=3461675"
Community content is available under CC-BY-SA unless otherwise noted.