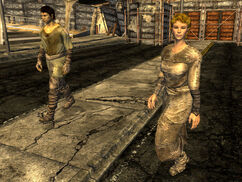 Two residents spawned on the Strip

The New Vegas resident is a vault dweller class character. They are faction North Vegas classified, so they were intended to live in North Vegas Square.

New Vegas resident was added during the development stages of Fallout: New Vegas, but was cut from the final retail release of the game.

Retrieved from "https://fallout.fandom.com/wiki/New_Vegas_resident?oldid=3242647"
Community content is available under CC-BY-SA unless otherwise noted.