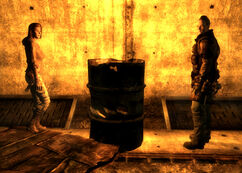 “Going to eat the next fucking rat I see.”

New Vegas citizens are people living in New Vegas in the Mojave Wasteland in 2281.

Those that choose to remain independent from the NCR and the Strip are extremely self-reliant, but not well off financially. Generally, they are much healthier and stronger financially than the residents of Freeside due to self-sustaining farming, hunting for their own meat and avoiding the drug use common to the populace in Freeside. They can typically be found at the Crimson Caravan Company, North sewers and The Thorn. They often live in groups in makeshift houses in sewers, abandoned buildings, or complete settlements such as North Vegas Square.

Retrieved from "https://fallout.fandom.com/wiki/New_Vegas_citizen?oldid=3107743"
Community content is available under CC-BY-SA unless otherwise noted.