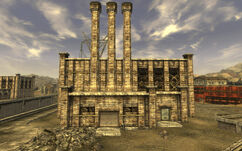 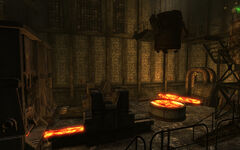 New Vegas Steel is an industrial building, to the east of Poseidon gas station within Fiends territory in the Mojave Wasteland in 2281.

Inside the building are two crazed Mister Handy robots, three Mr Steel robots, and a dead member of the Fiends. All enemies will respawn every three in-game days. The computer to the left of the entrance room shows that a factory automation test has been running for two hundred and four years. The Courier has the option of initiating the "Lucky 38 Executive Override" here, although it has no real effect. There are vats of glowing steel which will result in instant death, regardless of Damage Threshold.

The Lucky 38 Executive Override option on the terminal on the second level was originally supposed to be part of the quest The Moon Comes Over the Tower, but that section was cut.

The office
Add a photo to this gallery
Retrieved from "https://fallout.fandom.com/wiki/New_Vegas_Steel?oldid=3364760"
Community content is available under CC-BY-SA unless otherwise noted.