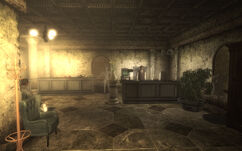 “That's it. Tenpenny promised me safety and security. And that damn useless Gustavo lets thieves run amok. This is the last draw. I'm leaving”— Anthony Ling in case the player robs all his inventory while undetected

New Urban Apparel is a store at Tenpenny Tower. It is run by Anthony Ling who mostly sells pre-War outfits, as well as a few sets of combat armor and leather armor. He carries between 200-300 caps and can repair items (skill of 15).

Behind the counter of the store there is a safe. His computer can be hacked (Average) to open his safe or just lock pick the safe (Hard) for 270 caps. He will leave the Tower if the caps in his safe are stolen, complaining about how Tenpenny Tower is no longer safe.

The store also contains a supply trunk with his whole inventory (requires the key, which must be looted off his dead body). There are some pre-War clothing in the wardrobes, as well as various pieces of pre-War clothing scattered throughout the shelves.

Retrieved from "https://fallout.fandom.com/wiki/New_Urban_Apparel?oldid=2212596"
Community content is available under CC-BY-SA unless otherwise noted.