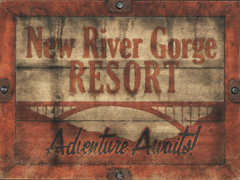 The New River Gorge Resort is a location in the Forest region of Appalachia.

The resort, located on the southern end of Interstate 59, near the New River Gorge Bridge, gives access to a broad variety of hiking trails and stunning views of the gorge and the river below.

The New River Gorge Resort is located on the eastern end of the New River Gorge Bridge. It is a sprawling resort area with a main welcome building, six residential cabins, and a pool area. A wooden walkway leads north across Interstate 59 to a picnic area and an adventure park with a high ropes course. Several wild mutfruit grow around the location.

A large circular driveway connects the welcome building to the main road. The building contains the remains of a gift shop with a few toys and a reception desk. There is a first aid box and a locked (Picklock 1) safe behind the desk. There is also a Nuka-Cola machine and cigarette machine in the waiting area, as well as an Eat-o-tronic attached to one of the walls.

All the residential cabins are roughly similar, all containing a living area, small kitchen, a bathroom, and at least one bedroom. However, they are in varying states of disrepair and contain different post-War occupants. There are also raider corpses in some of the cabins.

The pool area is east of the welcome building. It contains a large swimming pool, a covered picnic area, and a refreshment stand. The refreshment stand contains a cooking station and a first aid box. The pool itself is currently infested by mirelurks.

The New River Gorge Resort appears only in Fallout 76.