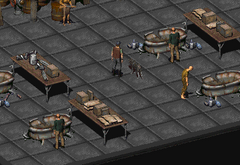 Three slaves at the station's brewery

New Reno slaves are characters put to work by the Wrights in the Railway Station's brewery, and by the Mordinos in the Stables' Jet production and packaging in 2241.

The slaves of New Reno have been drugged and forced into Jet production work by the Wrights and the Mordino family's. They have become incredibly weak and fatigued due to the labor.