Deliver a laser pistol to Eldridge
Find out who was responsible for Richard Wright's overdose
Bust up Wright's still
Collect tribute from Renesco
Suspect: Renesco

New Reno West Side ("Commercial Row" on the local map) is a district of New Reno in 2241.

It is the westernmost district of New Reno, also known as the Commercial Row. It remains under Salvatore protection, although, due to the presence of New Reno Arms, all mobsters are welcome. The district itself is fairly intact, compared to most of New Reno, in addition to being home to some of the more reputable sites in town.

Located on the west side is the New Reno Arms weapons shop, where Eldridge runs a mafia supply depot, complete with a wide array of weapons and ammunition and the occasional upgrade, courtesy of the savant Algernon roaming around in the basement. Also located here is Renesco's Pharmacy, where drugs are on the menu, in addition to skill books and the occasional first aid kit. The Drunk Cupid Chapel is found here as well and is the only place in New Reno where the player character can obtain spiritual guidance, of the non-sexual, non-drug type, albeit with an alcoholic taste and smell.

The basement of New Reno Arms is well hidden. It is in the backroom, where the dogs are, behind the shelves.

New Reno West Side appears only in Fallout 2. 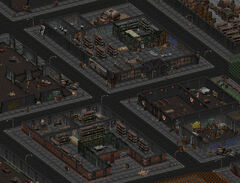