Deliver a laser pistol to Eldridge

Fallout 2
“You need guns, you go see my man Eldridge. He's got shit that'll kill people you ain't even MET yet.”— Jules

New Reno Arms is the large gun emporium run by Eldridge in New Reno West Side, the Commercial Row of New Reno.

The single largest store in the entirety of Reno, the New Reno Arms focuses on weapons and ammunition. Within its walls are stockpiled vast amounts of ordnance, divided into two types of stock. The basic one covers good, powerful weapons and is available to any client. The special one is reserved for made men of the Reno crime families. Eldridge sells to all families in New Reno, without preference. As he is the single largest supplier of guns, the families accept this and allow Eldridge to maintain his neutrality.

However, Eldridge does not sell guns out of the kindness of his heart. He makes a killing profit on the sales, not to mention custom upgrades for weapons, handled by Algernon, an idiot savant and a mechanical genius he keeps in the basement. Algernon lives in the basement of New Reno Arms tinkering amid the squalor and scattered parts surrounding him. The basement includes a fair array of tools, ammo, and even a howitzer. Algernon will also upgrade weapons for free. Eldridge's love of pre-War relics means he has plenty to give to Algernon to keep him amused (and maybe build a nuclear missile that will allow Algernon to keep Reno hostage).[1] Eldridge pays Jules on Virgin Street to send newcomers his way and also pays for an advertising slot during boxing matches at the Jungle Gym.

Judging by the presence of NCR propaganda and historical materials in his shop, Eldridge at least sympathizes with the Republic's goals. 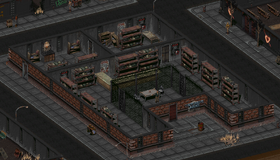 The Arms is divided into two levels. The ground floor is where Eldridge's workshop, quarters, and trade area are located. Customers deal with Eldridge in the large central room, where a simple table with two chairs is provided for trade negotiations and weapons are safely kept behind a chain link cage surrounding the area. The private areas house the aforementioned workshop and living quarters, the latter particularly spartan, with a single field bed, run down cabinets, and three dogs (Packard, Buck, and Missy) keeping watch. Eldridge knows they bark a lot, so he is content to just shout at them to shut up, rather than inspect what makes them bark. Behind the metal shelves in his quarters lies the entrance to the basement. 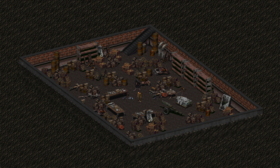 The basement is a large area filled with pre-War relics, ranging from junk to actual treasures (including a howitzer). This is Algernon's domain, who will happily upgrade any weapons for free. A sharp-eyed player can also find plenty of loot, including upgraded leather armor, an electronic lockpick, batteries, and even an actual Easter egg.

Eldridge will turn hostile if one sneaks into the basement at night.

Shop inventory (Made Men only) 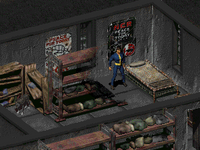 Hard to find the entrance to the basement, behind the large shelf case in the room with the dogs

Check the shelves behind the dog for the NCR history holodisk

The basement, with arms dealer Algernon