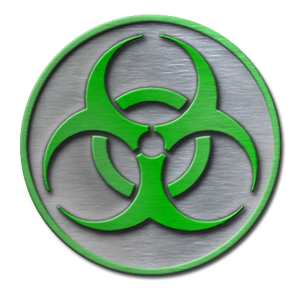 New Plague,[1] the Blue Flu, or Limit 115[2] is a socially transmitted plague which arose in the middle of the 21st century in the United States.

Limit 115 was a secret, genetically engineered weapon designed by scientists working for the United States government or the shadow government later known as the Enclave. The intent was initially to create a virus that would sterilize the infected people, to be used on enemies such as China.

The "New Plague" arose in 2052 after Chinese Hei Gui agents managed to steal some of the Limit-115 during a sabotage of the Hoover Dam testing labs. The spies were in the process of trying to escape Denver and were killed, breaking samples of the virus in a crowded public area. The epidemic killed approximately two-hundred thousand citizens in the United States, including cities such as Denver, Boulder, and Colorado Springs.[2] The United States closed its borders and the first-ever national quarantine was declared.[4]

In 2055, the West Tek Research Facility started working on a new virus to kill the New Plague.[1] Despite their efforts, they were unable to find the cure and the plague continued to spread in the 2060s, fueling national paranoia. The government was using the Plague as an excuse to register civilians, claiming a symptom of the plague was "socialist thoughts" and advocating isolation: people should stay indoors, read books and avoid "Ice cream socials". Furthermore, people were told that if they believed they were infected, they were to contact a disease control center, such as the disaster relief outpost in Point Lookout, for isolation immediately.[3]

The West Tek company had close ties to the federal government, and their work in viral research eventually led to them being chosen for the Pan-Immunity Virion Project in 2073, a project later known as Forced Evolutionary Virus.[1]

In February 2077, FEV research was leaked to the world through an unknown source. There were protests in many major cities and governments around the world, as well as accusations that the US was responsible for the New Plague.[4]

After the Great War

The physically deformed swampfolk inhabiting Point Lookout are likely a result of a combination of a mutated version of the New Plague, inbreeding, FEV, and radiation.

After the War, the NCR scientist Victor Presper, through extensive research, discovered the history of Limit 115 and its genocidal potency, and also discovered a viable means to cleanse the world. Using ULYSSES, the quarantine prison, and a ballistic satellite known as B.O.M.B.-001, the way to human planetary domination and order became clear. He needed to get to B.O.M.B.-001 and use the nuclear weapons to clean the filth and wretch that currently occupied the surface.

Presper and his followers released the New Plague virus in the remote areas near Boulder and Denver. It was close enough to the quarantine prison to spur ULYSSES into action, but not near enough to huge populations to start a general panic. Presper’s men would then stage an attack on the prison which would allow everyone to escape. This event would start a countdown of sorts for missile launch on B.O.M.B.-001. ULYSSES would assess the viral spread, try to gather up the escaped prisoners, and once 90% of the prisoners had been retrieved, launch nuclear missiles to “clean & prevent” any further infection. By the time this happened, Presper had planned to be on, and in full control of, B.O.M.B.-001, and reprogramming targeting solutions to clean the areas he wanted. Humans of his choosing would wait out the second nuclear holocaust in the Boulder Dome, until the day came where he declared the Earth safe for pure blood humans once more. The only thing that really was a time consuming factor for his plan was figuring out the launch codes on the satellite. But Presper knew he was more than intelligent enough to eventually figure it out. After all, he was far more intelligent than the monkeys who originally programmed the launch computers on B.O.M.B.-001, or so he thought.[5]

Retrieved from "https://fallout.fandom.com/wiki/New_Plague?oldid=2596921"
Community content is available under CC-BY-SA unless otherwise noted.